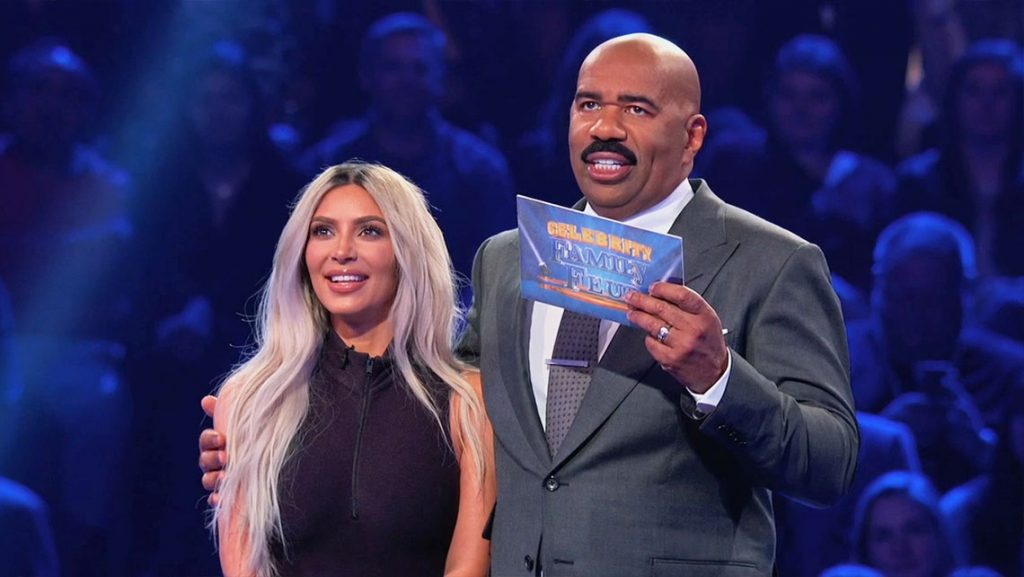 This season, Celebrity Family Feud has not only been a ratings hit, it has also been getting tens of millions of views on YouTube. Check out our top 10 most-viewed clips so far, and watch all summer, SUNDAYS at 8|7c on ABC!

#10 – Steph Curry & Chris Paul face off!
Two of the greatest point guards in NBA history go head-to-head at the podium! Who will come out on top in the buzzer battle? Take a look!
#9 – Dress SEXY to get a… WAIT, WHAT?
Kim Wallace says dressing sexy can get you something special. Just remember to talk to that man with the bald head…

#8 – Here’s why Kim & Kanye LOCK THE DOOR!
If you’re at a wild party and everyone’s naked, you REALLY don’t want THESE GUYS to show up!

#7 – Hey! Who invited THE PRESIDENT???
If you were getting naked at a wild party, Kendall Jenner knows who you wouldn’t want showing up!

#6 – You can say THAT again, Kim!
Kanye’s cousin Kim Wallace knows why Steve Harvey’s a good kisser… You won’t believe what she says!

#5 – Charles Barkley’s CRAZY answer… ain’t so crazy?
If a man’s zipper breaks at church, what might he use to cover it up? Charles Barkley’s answer STUNS his team! But wait…
#4 – Ayesha & Steph Curry SLAM DUNK Fast Money!
Wow! Steph Curry’s wife Ayesha destroys Fast Money! Can Steph get the rest of the points they need before the buzzer goes, and win $25,000 for the Community Foundation Sonoma County?
#3 – Shaq and Charles Barkley’s EPIC Fast Money!
Winning Fast Money is a tall order, so who better to take on the challenge than Shaquille O’Neal and Charles Barkley! There’s $25,000 for the Mustard Seed School at stake… Will the NBA’s finest score the points they need?
#2 – Kardashian Vs West! Let’s meet the teams!
Kanye & Kim take on Kris, Khloe, Kendall in an EPIC Celebrity Family Feud episode… Let’s meet the teams!
#1 – Kim & Kanye’s INCREDIBLE Fast Money!
Kim crushes Fast Money! Can Kanye close it out and win $25,000 for Children’s Hospital Los Angeles? This is one Fast Money you won’t want to miss!

Watch Celebrity Family Feud all summer on ABC, SUNDAYS AT 8|7c, and stay tuned for To Tell The Truth starring Anthony Anderson at 10|9c! Go Feud!