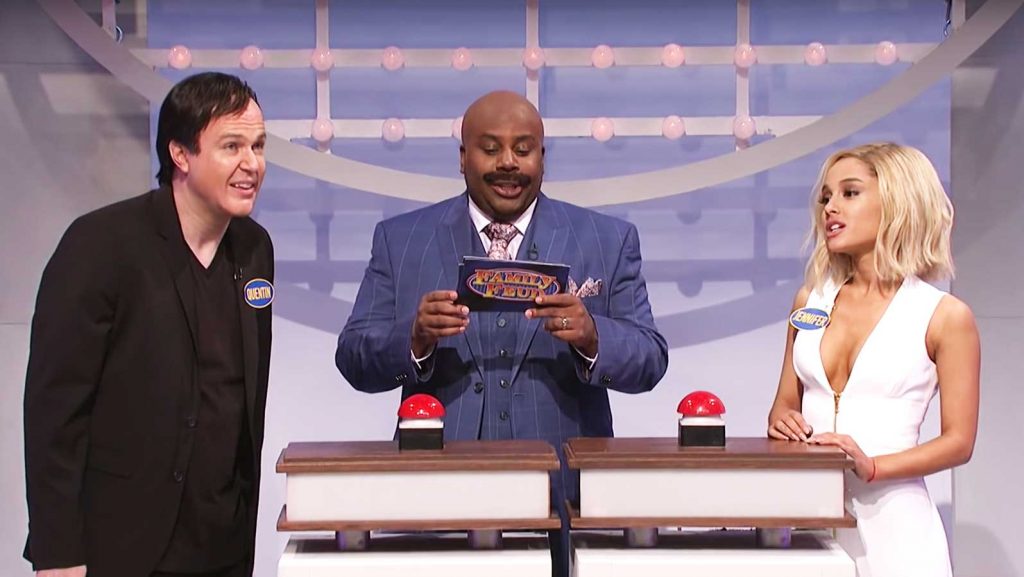 Family Feud fun can’t be contained to our stage! Over the past few years, sitcoms, talk shows, and of course sketch comedy legend, Saturday Night Live, have contributed to making the Feud a staple of American pop culture!

Survey Says? Join us as we look back at some of Feud’s other finest TV moments.

The Reynolds family took on the Barrett family—and one another—when they appeared on the game show ‘Family Fight.’ Despite best efforts by some, the family’s eccentricities can’t be kept under wraps. Enjoy part 1 here:

A new take on our favorite game, Jimmy faces off with Taraji P. Henson in ‘Fast Family Feud,’ where the level of competitive spirit is only outdone by the NSFW responses.

Jimmy hosts a game of ‘Avengers Family Feud’ with Avengers cast members Chris Evans, Mark Ruffalo, and Jeremy Renner as The Americas vs. Chris Hemsworth, Robert Downey Jr., and Scarlett Johansson as The Mans. Don’t give up your day jobs, Americas!

Hold up. Only SNL could make this work: when a contestant and his new wife and kids take on his former family on the Feud, things escalate quickly…

The Tonight Show Starring Jimmy Fallon – The Fallons vs. The Roots

Steve Harvey appeared on Fallon to host a special edition of Family Feud featuring The Fallons vs. The Roots. One hundred polled TV audience members weren’t kind to the tuba man. We’ll leave it at that.

A strong host, great energy, and good answers get you far on Feud… except when the survey says otherwise. Watch Ellen’s team challenge a group of audience favorites and then watch both teams get hilariously stumped when asked about nicknames for body parts.

We have to hand it to the pros. It’s tough to beat SNL, especially when it comes to celebrity edition game shows. Though Kenan Thompson holds his own as Steve, the spotlight is up for grabs as a cast of famous actors go head to head with a group of distinctive directors.